It’s been a few months since I’ve posted a new entry in my Favorite First Lines series but today I am thrilled to share a fantastic first novel by one of my favorite bloggers, Andra Watkins (The Accidental Cootchie Mamma).

March 1st is the official release of To Live Forever: An Afterlife Journey of Meriwether Lewis and the kickoff of a truly unique adventure as Andra joins her characters and begins a 444 mile walk along the Natchez Trace from Natchez, MS to Nashville, TN. Andra will be chronicling her adventures through words, images and video and all the details are posted on her blog at AndraWatkins.com. 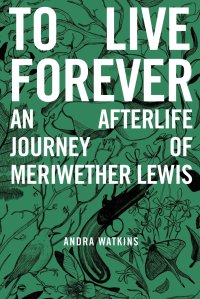 The story unfolds through the points of view of three main characters flowing through time from the months before Meriwether’s death in 1809 and into the spring of 1977.  The publishers summary below gives you a taste of what’s to come.

Explorer Meriwether Lewis has been stuck in Nowhere since his mysterious death nearly two centuries ago. His last hope for redemption is helping nine-year-old Emmaline Cagney flee her madame mother in New Orleans and find her father in Nashville. To get there, Merry must cross his own grave along the Natchez Trace, where he duels the corrupt Judge, an old foe who has his own despicable plans for Em. To Live Forever: An Afterlife Journey of Meriwether Lewis is a genre-bending novel that usually falls through the cracks as agents and publishers struggle to figure out ‘what shelf does it go on?‘ At Word Hermit Press, our answer is every shelf! A rich palimpsest of history, suspense, paranormal and biography, we think To Live Forever creates its own category, which we call “fantastic fiction.” We believe you will agree.

Meriwether Lewis, renowned co-captain of the Lewis and Clark expedition to the Pacific and territorial governor of Upper Louisiana, died Wednesday, October 11, 1809.  He was thirty-five.

A drop of sweat hung from the end of my nose.  I watched it build, cross-eyed, before I shook my head and made it fall.  It left wet circles on the front of my dress.

I’ve had the pleasure of reading To Live Forever before its official release and plan post my full review soon but didn’t want my slow writing to keep me from sharing Andra’s work with you today.  I hope you enjoy it as much as I did!

16 thoughts on “To Live Forever by Andra Watkins”