Don’t keep all your feelings sheltered – express them.  Don’t ever let life shut you up.

Walking through Seattle’s Pike Place Market on Christmas Eve I deliberately looked away from the brightly colored food and flower stalls to spend some time watching people and their surroundings. The traditional market attractions are always a treat to see but the people who bring vibrancy and life to this part of town leave their mark in more ways than one and signs of creativity and self-expression are on every corner.

The walls of the old brick alley leading to the infamous Gum Wall are covered with an entertaining mix of graffiti and the combinations of 80’s popular culture, bright colors and daily self-expression caught my attention.  I’ll admit I had to look up the definition of “swone” in the Urban Dictionary but the contrast of the harsh black and white next to the Jane Fonda aerobics poster made me laugh.

Here we see political commentary about corporations and campaign donations next to a shout out to the Seattle clown J.P. Patches. The live and unrehearsed J.P. Patches Show was one of the longest running locally produced children’s programs in the United States and ran on Seattle television from 1958 to 1981. As a kid I thought J.P. and the gang were going to be around forever and households from Seattle to Vancouver, BC tuned in every morning and afternoon for a mix of family friendly humor and gag jokes interspersed with some racy double entendre to keep the parents watching too. 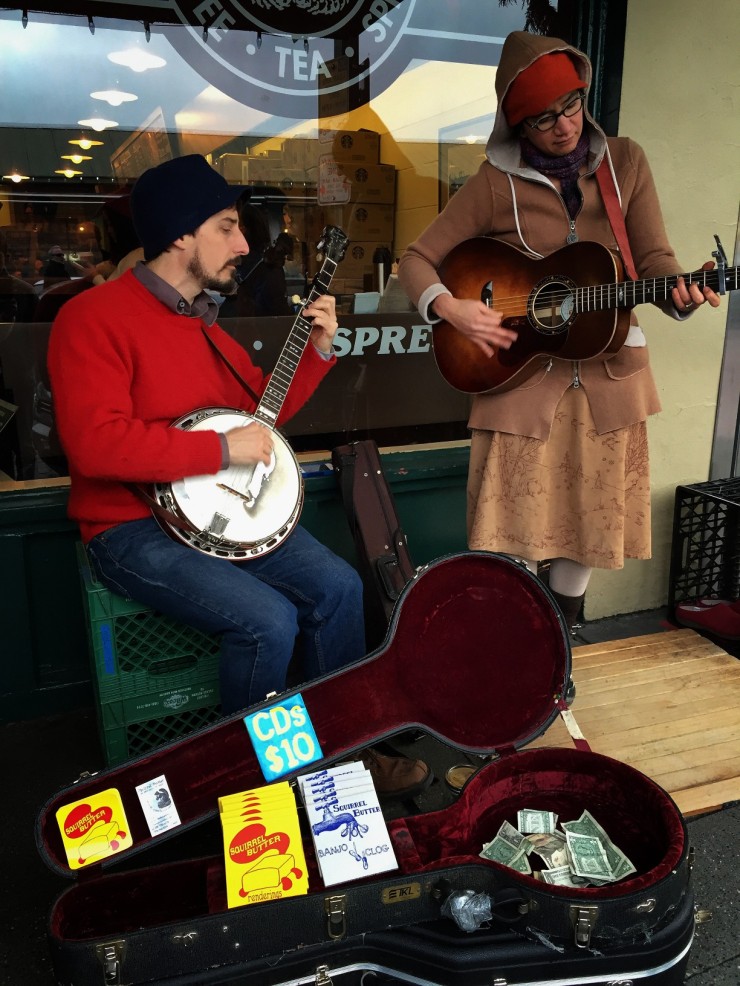 We also stopped in front of the original Starbucks to listen to the entertaining Squirrel Butter perform their original blend of music influenced by Appalachian, early country, jug band and blues artists from the late 1880’s through the 1950’s.  Charlie Beck plays the banjo, fiddle and sings while Charmaine Slaven provides guitar, vocals, feet (clogging) and Square Dance calling.  They met at an Old Time Gathering event in Portland, OR and have been performing together throughout the Seattle area since 2005.

Since I have the opportunity to express myself every time I sit down to write a post many of you have a pretty good idea of what I like to see and share so today’s post about self expression is a great chance to look a little closer at some fresh choices outside of my usual point of view.