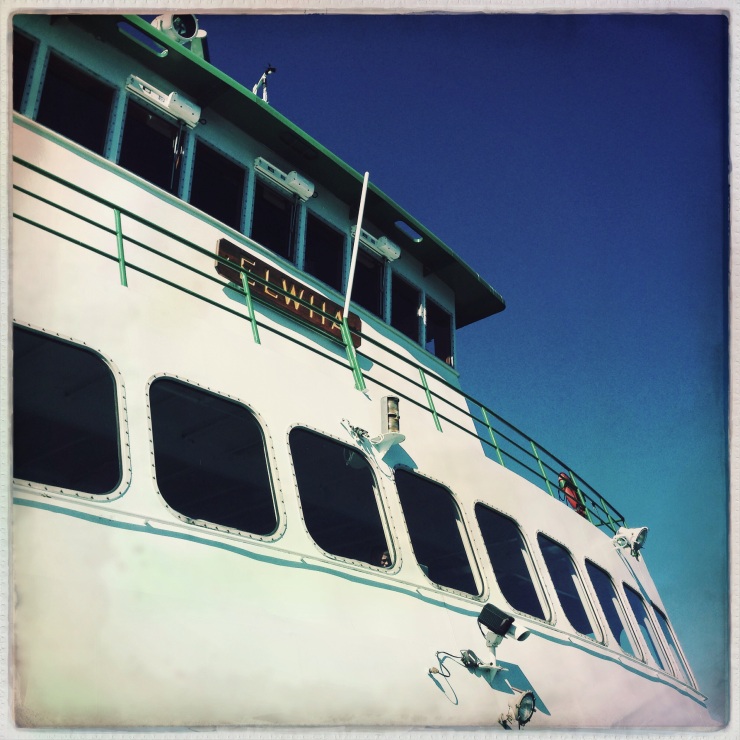 It’s hard to pay a visit to the Puget Sound area and not see at least one green and white Washington State Ferry cruise by carrying commuters, tourists and travelers across the water.  These large vessels serve the areas surrounding Puget Sound as well as provide vital and reliable transportation to the San Juan Islands and Canada.  I’ve always loved riding the boats and have hundreds of Ferry photos in my archives  but it wasn’t until I spent a few minutes researching the fleet for this post that I discovered  it is the largest passenger and car system in the United States and its 22 active ferries mean it is the third largest in the world by fleet size.  If you count by vehicles carried the WSF system jumps to #1 in the world with an annual 11 million cars driving aboard.

The ferry system has its origins in the “Mosquito Fleet“, a collection of small steamer lines serving the Puget Sound area during the later part of the nineteenth century and early part of the 20th century. By the beginning of the 1930s, two lines remained: the Puget Sound Navigation Company (known as the Black Ball Line) and the Kitsap County Transportation Company. A strike in 1935 forced the KCTC to close, leaving only the Black Ball Line.[3]

Toward the end of the 1940s the Black Ball Line wanted to increase its fares, to compensate for increased wage demands from the ferry workers’ unions, but the state refused to allow this, and so the Black Ball Line shut down. In 1951, the state bought nearly all of Black Ball’s ferry assets for $5 million (Black Ball retained five vessels of its fleet).[4] The state intended to run ferry service only until cross-sound bridges could be built, but these were never approved, and the Washington State Department of Transportation runs the system to this day.

Posted as part of Sue’s A Word A Week Photograph Challenge:  Transport.

34 thoughts on “A Word A Week: Transport”

One of my favorite summer things - hiking Fridays! Can’t beat this view. 😀🏔🎒
Our summer goal is to hike at least one day per week and this trip to Hurricane Ridge in Olympic National Park didn’t disappoint! The wildflowers were in full bloom, the company was wonderful and someone’s geocaching note told me I was beautiful. 🥰 All in all a perfect day in the PNW.
So happy to be celebrating Ryan’s 21st Birthday! Cheers! 🍻Lunch and a beer at Church Key Pub, on our way to a movie now. 🤗❤️
Inside with the #superbowl or outside in the sunshine… I pick outside!
Nothing beats a beautiful PNW sunset. #edmondswa
From a late summer road trip over Stevens Pass, our new PNW Bigfoot logo backpack was just the right size for travel gear and lunch! Each premium quality Champion pack is embroidered to order - your adventure is up to you…

My Tweets
Join 2,541 other followers