Far better to be the simplest pedestrian, with knapsack on back, stick in hand, and gun on shoulder, than an Indian prince travelling with all the ceremonial which his rank requires. Jules Verne 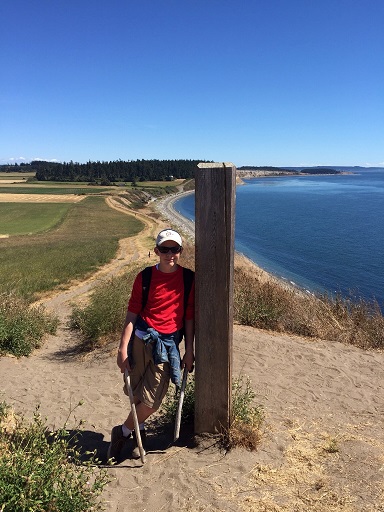 Substitute the above mentioned gun for a trusty slingshot and Jules Verne perfectly describes Ryan’s preferred method of exploring.  As soon as his hand could hold a nice, long stick  he insisted on at least one along with a little backpack every time we left the house.  The sticks now live by the door and his backpacks are larger but the habit remains.  If we’re going adventuring he’s ready with stick and supplies.

Posted as part of the Weekly Photo Challenge:  Pedestrian.

6 thoughts on “The Simplest Pedestrian”

Good bye 2020, I’m so ready to have you in the rear view. Counting the hours till 2021...
So.. if I took waterfront pics on Christmas Day 2019 but then pretty much disappeared from social media for a year can I still post them as new? If yes, then get ready - I have lots of unposted pics from the year I’m really looking forward to having behind us. This sunset moment was one of our last before COVID upended everything and I’m sharing it today as a marker point, a feeling to reach for again in 2021.
Merry Christmas! No matching pjs here but we do have fun with nutcrackers. 🎄Wishing you all a peaceful and happy day filled with good food, fun and safely distanced family moments.
Knock, knock.
Happy Solstice! If you’re lucky enough to have clear skies tonight I hope you step outside just after sunset to view Jupiter and Saturn come so close together they appear as one large Christmas Star. ✨ It may be overcast in the PNW but we’ll have plenty of candles and warmth inside to stay cozy through the longest night. 🕯
Some rainy days are prettier than others... Summer in the PNW. 🌧⛅️🏔